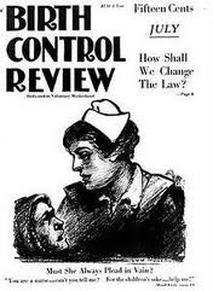 The Comstock Act was enacted in 1873, and was a federal law that defined contraceptives as illicit and obscene and made the distribution of birth control through the mail and/or across state lines a federal offense.[2] It “Forbade the dissemination of pornography, abortion devices, and any other drug, medicine, article, or thing designed, adapted, or intended for preventing contraception.”[3] At the time, many Americans were opposed of birth control because they believed that it promoted promiscuity, lust, and gave the approval to men to pursue greater sexual urges outside of their marriages. By denying birth control, women were forced into the filthy hands of midwives and quack abortionists.[4] Sanger estimated that 250,000 abortions occurred every year, 75 percent of disease that men and women contracted were the result of ignorance about sex and their own bodies, that the United States had the largest number of abortions and deaths from these abortions, and 300,000 babies under a year old died every year in the U.S, due to neglect, poverty, and hunger.[5] If women were only educated and given the knowledge about their bodies and about the different birth control methods, unnecessary deaths from abortions and unwanted child births would decline drastically.

For those who lived in poverty, contraceptives were a necessity. The more children they had the more likely they lived in poverty and would
remain there. All social classes of women suffered from the ban on birth control devices and information. Though, the working class suffered the most. Working class women were poorly educated and had little to no access to health care and their cultural and religious beliefs taught them to be obedient and to not deny sex to their husbands.[6] Though, they were “Denied information from the medical establishment on birth control and fearing contraception as well, made working-class women resort to crude and often deadly methods of abortion to end their unwanted pregnancies.” [6] Dangerous self-induced abortions led to death, permanent damage and/or comas.

Progressive women such as Margret Sanger and Emma Goldman, diligently fought for women’s sexual freedoms and the legalization of contraceptives. Both women spoke out and passed out contraceptives and pamphlets on birth control. Margret Sanger was strongly influenced by Emma Goldman, who was a free speech advocate and gave the first public demonstration of contraceptives. Goldman believed that effective birth control would lead to women’s sexual freedom. Goldman said, “Women need not always keep their mouths shut and their wombs open.”[7] Sexual liberation could not be achieved when women did not have control over their own bodies. Sanger stated, “No woman can call herself free who cannot choose the time to be a mother or not as she seems fit.”[8]

As a nurse, Margret Sanger witnessed firsthand the misery, suffering, traumas, sadness, defeat, and despair in women who were recovering from unwanted and harsh child births and botched abortions. She saw the need for all women to have access to birth control. Sanger opened America’s first birth control clinic in Brooklyn NY, which was quickly shut down and she served 30 days in jail.[9] Sanger’s arrest was highly publicized and gained the birth control movement greater support. Sanger founded the American Birth Control League (ABCL) in 1921, at the first American Birth Control Conference in New York. In 1923 the ABCL founded the first legal doctor-staffed birth control clinic, The Clinical Research Bureau (CRB), later known as the Birth Control Clinical Research Bureau (BCCRB). The clinic was the largest contraceptive clinic and severed thousands of men and women. It provided gynecological services, training for physicians and students, contraceptives, supplied information and knowledge, fitted women for diaphragms, keep extensive records of all patients, for their research on the safety and effectiveness of birth
control devices in order to support the efforts of the clinic and the movement.[10][11]

In 1933 the BCCRB challenged federal obscenity laws. Sanger arranged for a package of (pessaries- a precursor to the diaphragm) to be sent from Japan to the BCCRBs medical Director, Dr. Hannah Stone, knowing that customs would seize the package, which they did. In the trial U.S V. One Package, the U.S Circuit Court of Appeals ruled in releasing the package in 1936. The Court ruled that physicians could receive and mail contraceptives and contraceptive information to maintain the health and well-being of their patients. [12] This ruling was a great victory for the birth control movement, and brought awareness to Americans to see the need for contraceptives.

Without Progressive activists like Sanger and Goldman, women would not have the sexual freedoms that they have today. The birth control movement forced Americans to open their eyes and see the need for contraceptive devices and educational information pertaining to their bodies. Birth control meant freedom for women. The freedom to decide when was the right time for them to have children and to decide how many children they wanted to have. Birth control clinics educated women about their bodies and gave them choices in the matter of pregnancies. Clinics gathered extensive research and information, which led to greater advances and knowledge in the medical field.